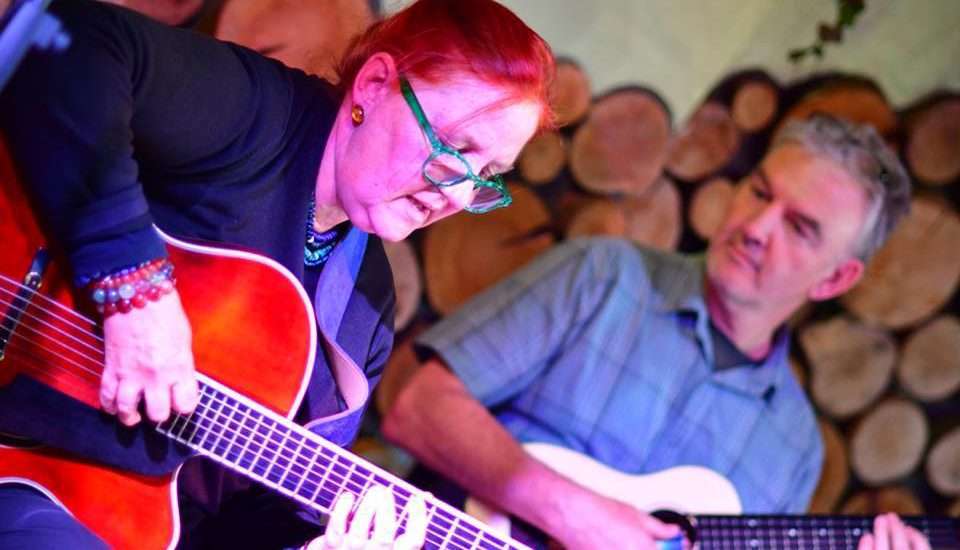 Kathy is a jazz guitarist, composer, researcher and educator based in Bradford, West Yorkshire. She first studied at Leeds College of Music in the early 80’s, co-founded Leeds Jazz, then set off on a five year tour of Europe with her husband John and daughter Ruth.

We performed at the Sorgues, Ulm (in Germany) and Avignon Festivals, were taken in by the gypsy communities in the South of France and Germany and performed at gypsy clubs and gatherings. We also played for innumerable private parties and functions including riverboat trips down the Rhine and busked under the disapproving stare of Beethoven to an audience of 600 in Bonn.

On our return, we lived in Rye Harbour, with the sun, the birds and our dog Dylan and played on the South coast. In particular, Simon Wilkes owner of the Street Cafe in Hastings became a strong supporter and gave us quite a few gigs. The Street Jazz compilation cassette he produced included Hastings stalwarts, us, Liane Carroll, Roger Carey, Pete White, Jan Ponsford, Frances Knight and others. Then in 1996 our daughter Ruth was offered a place at Chetham’s music school and so we moved to Manchester.

With an Arts Express grant, (and assistance from Chris Hodgkins at Jazz Services) we made a CD called Night Cafe. You can hear a couple of tracks on the tracks page Yes, and we still have some left…….Gigs in the North ensued and aided by Mike Butler and City Life magazine, we toured and got more widely known. I formed an octet in the early noughties and wrote music for it, including a suite inspired by Pablo Neruda poems, which was premiered at the Bridgewater Hall during the Manchester Jazz Festival.

I also took an MA in Jazz Performance, taught as a lecturer at Arden College and then spent several years working on a PhD at Sheffield University. The resulting thesis: Learning Jazz Improvisation, is available in PDF format here, and I continue the research through my daily teaching practice. From 2007-2011, I was Senior Lecturer in Jazz at Leeds College of Music where I developed the teaching practice and research more intensively. This work was recognised nationally when I won Jazz Educator of the Year at the 2010 Parliamentary Jazz Awards.

In 2008, guitarist Deirdre Cartwright and I formed a duo, Emily Remembered, which is a tribute to female guitarist Emily Remler and released a debut CD in 2011 that was launched at Ronnie’s in London and at Band on the Wall in Manchester. Currently I play the Inside Outside jazz duo with John Dyson, and a quintet called The Jazz Police with John Dyson, Martin Longhawn, Steve Hanley. and Tom Riviere.

In 2013 after many years as a committed and enthusiastic activist in the Musicians’ Union, I became Chair of it’s national Executive Committee – the first woman to do so in the 120 years of its existence!